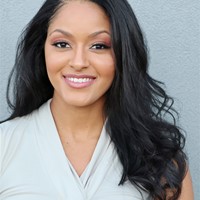 Former music video model and sex trafficking survivor Rachel Thomas is a dynamic educator who speaks from the heart and aims at the head.  With a Masters in Education from UCLA and over 12 years’ experience in teaching and mentoring, Rachel founded Sowers Education Group to sow seeds of sex trafficking awareness and survivor empowerment.

Rachel was a junior at Emory University when she unknowingly met a trafficker: a professional and well-spoken ‘modeling agent’.  He had business cards and a portfolio of contracts with beautiful models of all ethnicities.  He groomed her with high-quality, all-expense paid photo shoots and legitimate modeling work in various music videos and magazines.  Then, after he had collected a W9 form from Rachel (including her parents’ address and SSN), the relationship became dangerous.  He began forcing her to have sex with buyers, threatening to kill her and her family if she didn’t obey.  He became physically and psychologically abusive, ushering Rachel into the dark world of sex slavery.  Thankfully, the police and FBI were eventually able to help Rachel, and the trafficker’s dozens of other victims, to escape this devastating situation.  As Rachel continues to overcome and understand her experience, she is “turning a mess into a message” that will spread prevention and empower victims.

Since 2012, Rachel has reached over 150,000 live audience members and millions more through numerous media outlets including New Day Morning Show on CNN, Inside with Chris Cuomo: Anyone’s Daughter on HLN, The T.D. Jakes Show, The New York Times Upfront Magazine and ABC’s Newsmakers.  Rachel was honored by Congressman Ed Royce of California’s 39th district and Los Angeles Supervisor Don Knabe for her leadership and trafficking prevention efforts. Recently, Rachel was appointed to the United States Advisory Council on Human Trafficking for a term of 2 years.  www.RachelCThomas.com