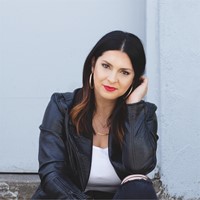 Rebecca Bender is the CEO of the Rebecca Bender Initiative and founder of Elevate Academy, the largest online school for survivors of human trafficking in the world. She is an award-winning thought leader, advocate, and consultant who equips individuals and organizations to identify and fight human trafficking in their own back yards. Rebecca has been recognized by the FBI and received multiple awards for her leadership and advocacy in the field. She testified in front of the legislature to change Oregon SB673, and regularly testifies as an expert witness in trial and investigations around the nation. Rebecca has trained well over 100,000 professionals, including FBI, Homeland Security, local law enforcement, vice units and medical personnel. In 2017, Rebecca was appointed as one of twenty-one representative members on the National Advisory Committee on Sex Trafficking of Children and Youth in the United States. The Committee advises the Secretary of the U.S. Department of Health and Human Services and the Attorney General on practical and general policies concerning improvements to the nation’s response to the sex trafficking of children and youth in the United States. She also served on the Department of Justice task force, the core committee to the Equality Model and consults for many of our nation’s leading nonprofits.

For nearly six years, Rebecca was trapped in the dark, violent world of sex trafficking. When she escaped her trafficker, she knew she wanted to fight to change culture and offer hope to survivors, so she launched Elevate Academy. Since 2021, Elevate has equipped over 850 students in 425 locations and 12 countries, Elevate Academy provides survivors with professional development, mentoring, specialized curriculum, and the tools they need to thrive.

A college graduate with a Master’s degree in religious studies, Rebecca works on the front lines as a sought-after speaker, social influencer, consultant, and podcaster. Her memoir, In Pursuit of Love was published by Zondervan in January 2020. She currently lives in the beautiful Pacific Northwest with her husband and four daughters, plus some chickens, dogs and bees.