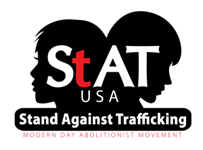 Stand Against Trafficking U.S.A. (StATUSA) is a charitable 501(c)(3) nonprofit
organization currently serving Southeastern North Carolina and Northeastern South
Carolina.
Since 2009, StATUSA has committed to a victim-centered approach in the fight against
human trafficking and served over 200 victim survivors since January 2016. With a
mission to help the victim-survivors of human trafficking heal, dream, and succeed in
life, the StATUSA team brings over ten years of human trafficking and program
development experience to this effort. Initially chartered in North Carolina, it quickly
became apparent that with the frequent transience of this population of persons back
and forth between the state lines of North and South Carolina that StATUSA’s decision
in 2019 to expand into South Carolina could best serve both states.
As we assist these victims, we have and will continue to base our target population on
the UN definition of human trafficking; “ ... the recruitment, transportation, transfer,
harboring or receipt of persons, by means of the threat of force or other forms of
coercion, of abduction, of fraud, of deception, of abuse of power or of a position of
vulnerability or of the giving or receiving of payments or benefits to achieve the
consent of a person having control over another person for the purpose of
exploitation. Exploitation shall include, at a minimum, the prostitution of others or
other forms of sexual exploitation ...”

Where your agency is located